The howl of the wolf can be heard from miles around. It is the trademark by which these very animals are known. A wolf may howl for a variety of reasons but the main one involves being able to identify where the rest of the pack it belongs to happens to be. These howls can also be identified as a way to warn other packs in the area that they are stepping into a territory that has already been claimed by another.

In order for the howl to be effective, a wolf has to bend the neck upwards. This howling is the source for different legends like “they are howling at the moon.” The reason is because the howl is not effective when the head is lower. This is what allows them to get the high pitched volume. Each wolf has a slightly different sound which is why other pack members know they are being called.

The howl is also a way to get the members of the pack worked up and excited about going hunting. They may howl in unison at this point before they go out there to look around. Think about how a sporting team rallies with the coach and makes a shout out before they take their positions. That is the same with the howl.

It is rumored that howling wolves during the day means they are rabid. This is not true as you can hear them any time, but night is when they are most active. You do not need to be afraid if you hear them though. The howls can be heard from many miles away so they likely are not nearly as close to you as they may sound.

Barking is another type of vocalization that wolves take part in. Usually this is done within the pack to try to get something in motion. It can be a signal that the pack is in danger so they need to run. It can be a signal that it is time for the pack to move on from a certain area. Sometimes, the alpha male will bark to get the attention of one female. It is all part of the structure and organization within the pack.

Low growls are often used by the alpha male and the beta female. They are signs to keep the other members of the pack in order. The omega wolf is the lowest ranking one of all in a pack. They will often try to move forward in a group but these growls are reminders of where they rank.

Growls is a way for the wolves within a pack to show aggression towards each other. 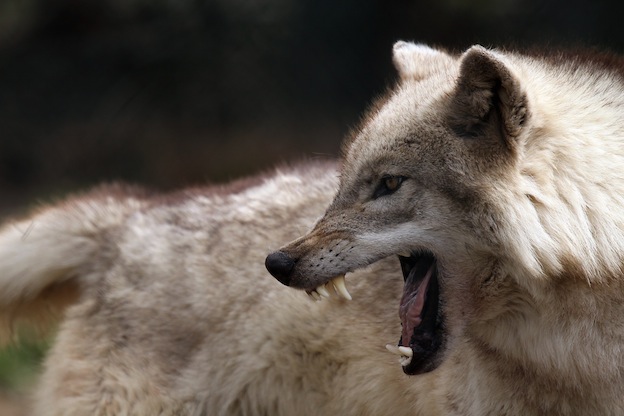 It is not very often that they do so. However, they get along well for the most part. They may hiss at the pups to warn them not to do something or when their behavior is becoming too playful for the overall security of the pack. The older wolves can engage in this type of play with each other for fun, but to the untrained observer, these sounds and actions may look like a fight.

A combination of calls are used to help keep tabs on pups as well as other members of the pack. They may separate to scout out areas for food. The calls give them a built in way to check in on a regular basis. Also, It allows those that have found potential food sources to call the other wolves in the pack to come help them.

Whining and whimpering are often ways that the younger pups communicate with their parents and other pack members. Soon, they are taught the more effective types of communication to use though.

Communication with wolves may require a serious level of observation from an external body. The truth is that wolves are social animals. Hence, they can communicate properly amongst themselves. It is easy to tell how communicative a wolf can be because of what is observed in dogs.

A dog wags its tail around its owner especially when it is happy. Similarly, it barks at strangers to chase them away or to send signals of possible danger to its owner. It could also roll over when it sees another animal or dog approaching.

These ways of communication for dogs can serve as a hint about how wolves would communicate. This is because wolves are seen to be ancestral animals to dogs. Hence, dogs are believed to inherit most of their abilities including the language of communication from wolves.

MODES OF COMMUNICATION FOR WOLVES

Basically, wolves have three major modes of communication. These are;

Being humans, it is easy for one to think communication is about writing and talking to one another. However, there are yet other effective ways of communication for animals, especially wolves. They can neither write nor talk but they have modes of passing across information between their packs.

DO WOLVES BARK? IF NO, WHAT SOUND DOES A WOLF MAKE?

As explained, a wolf’s howling at night is not to the moon but a mode of communicating. Just like a wolf would have done during the day, it can make the howling sound at night (when the moon is up). The wolf is more heard at night because it (night) is a more active time for a wolf (nocturnal animals).

More so, the howling is louder at this time because the wind is not as loud as during the day. Now to the questions, do wolves bark? Yes, they do. Just like a dog communicates by barking, a wolf is not different too. Nevertheless, a wolf produces other forms of sound like growling, whimpering, and howling.

On some occasions, they can combine the various types of sound. We could have a growl-bark or bark-howl. For them, barking is to warn of approaching danger. If you are a close observer, you would see a mother wolf bark at her pups to signal an incoming danger to them. Other times, a bark is necessary to indicate aggression or protection to prevent invaders from their territory.

OTHER SOUNDS BY A WOLF WHEN IT IS NOT BARKING

Now to the other question, what sound does a wolf make? There are other sounds like whimpering. A mother whimpers to show her willingness to cater and provide for the needs of her pups. Sometimes, whimpering is the sound an inferior wolf makes to show its submission to a more powerful or dominating wolf. So, whimpering is a valid sound for wolves.

Another sound they make is Growling. Most times, wolf growling is to serve as a warning. Since wolves move as a pack, there will be a need to warn others of predators or intruders. A growl could be employed instead of whimpering to show a sign of surrendering to a more powerful animal.

WHY DO WOLVES HOWL?

Howling is another mode of communication a wolf employs to communicate amongst themselves. Howling is a loud sound they make. The intention is to send a signal over a long distance. The howling sound could be defensive to make the pack of wolves stay together and keep strangers away.

Sometimes, the howl is to ensure that the wolf can maintain their ground and protect their little pups who cannot travel from kill sites and danger. The howl is a sound to stay together, find each other, and sometimes catch fun.

Body language is another important way a wolf can communicate with its pack, more especially the rules of the pack. As a social group, there are rules wolves follow to ensure order among them. A major rule for them is the hierarchy of leaders and followers.

A leader in a pack is parents (male and female). These two are dominant pairs that are responsible for other pups and how they come to be. One can also refer to them as the breeding pair. Also, the male and female wolves are often the pioneers in unoccupied territory.

Any wolf that wants to lead a pack or become the alpha make can leave its current pack and mark out a new territorial space. It can kill an alpha male and occupy its spot. However, if the alpha male is already missing, things are easier for the wolf.

The wolf shows dominance by carrying its tail high to stand. The rest of the wolves have submissive body language which shows they are not going to usurp authorities. Their tails are lower than their bodies and sometimes, they paw to the dominant wolves.

SUBMISSION IN A WOLF PACK

For a wolf, submission can be in two forms.

The active submission has evident actions like muzzle licking, crouching, and tail tucking. Active submission is first displayed by pups because they are the least dominant members of the pack. This submission advances to their adulthood.

Since the situation does not necessarily mean dominance, the female wolf will gradually push her rear leg backward. The male wolf can easily inspect her and be ready to mount on her.

Urine, scats, and pheromones are ways wolves send information to other wolves. Since they have a good sense of smell, they can easily trace the whereabouts of another wolf through its urine, pheromones, or scats. Life has never been made easier than this for the animals.

Communication among wolves is a great deal. Like I said earlier, you may need to be a close observer to see how it really works among such a social animal.