The Mackenzie Valley Wolf is a subspecies of the Gray wolf. In 1995-96, they were brought from Canada to restore populations in Yellowstone National Park and central Idaho; it is considered to be one of the rarest subspecies of wolves in North America. The Mackenzie Valley Wolf has been endangered for quite a while now and all efforts are being made to preserve it. In this article, you will find out more about this rare animal.

Here are some interesting facts about Mackenzie wolf:

Proudly captured in the striking details of this wolf figurine, the northwest wolf is part of a shy, tenacious subspecies that once roamed from Alaska to British Columbia. Tough and proud, the Northwestern Wolf is an ideal companion for any terrain. They are large, strong and powerful.

With a thick, coarse coat that comes in grey or black with white marks. These wolves live largely as a family unit and hunt in packs. Known for its thick plush coat and rounder head. The northwestern wolf remains notable among pure wolves for its exceptional intelligence and ability to communicate with other wolves.

Mackenzie Valley wolf inhabits northern areas of North America. It ranges from Alaska, southward into Canada to the Northwest Territories and adjacent areas of the Yukon. The Canadian provinces of Alberta, Saskatchewan and British Columbia are also part of its range.

These animals adapted to forested areas, not prairies. Their shortened legs are better for tree climbing than chasing prey across open grasslands like that of the Gray wolves on the Eastern side of North America.

Other regions found are the western mountains of Montana, Idaho, Wyoming, Oregon, and Washington. 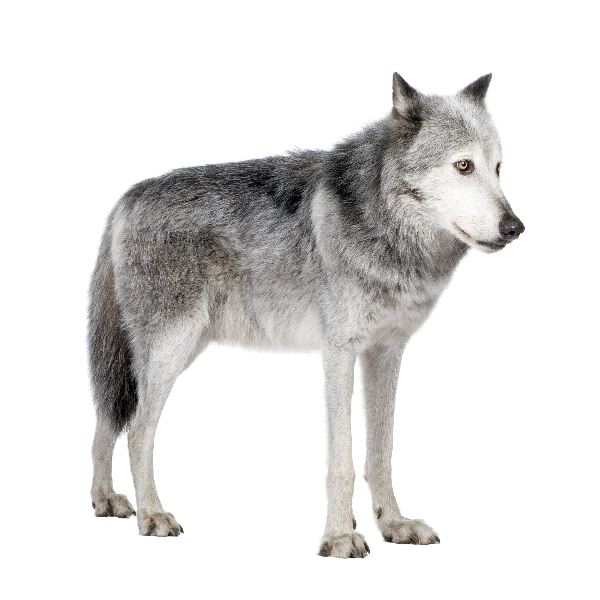 Nestled in the foothills of the Cascade Mountains, the Northwestern Wolf’s habitat has been reduced to the borders of national forests, where foraging and denning activities still remain relatively unencumbered.

The Northwestern wolf is a creature of the forest, especially coniferous ones. It lives in a beautiful, green world of trees, shrubs, and ferns. There are few rocks or large expanses of bare ground. Instead there is a world of small trees and low brush, interwoven stems, and soft mosses.

Mackenzie wolves have variation in habitat depending on if it’s in the north or south region of Alaska. However, they tend to be conveniently located near moose, elk, and caribou for easy kill.

The Northwestern wolf is very nimble and speedy for a canine. When it catches prey, it often does so by chasing for long distances at high speeds. This type of hunting is an adaptation to the large open spaces in the region, which makes it difficult for predators to sneak up on their prey.

The intelligent wolf is a creature that thrives on accuracy. Just ask any moose, elk, or caribou. The animals subsist mostly on ungulates such as mule deer, white-tailed deer, elk, bighorn sheep, and mountain goats.  It communicates with its pack by howling and uses scent marking to establish territory.

Northwestern wolves are social animals and live in packs. They are mostly active during the mornings and evenings, though they may be active at any time of the day. A single pack may travel as far as 40 miles per day on a hunting trip, going from food source to food source.

Pack members create a hierarchy of dominant and subordinate roles and determine pack order through ritualized dominance displays. Ranking is established in the first year of life. Subordinate wolves accept their lower rank without protest, while dominant wolves assert their authority within the pack.

A wolf displays submissiveness by crouching, tucking its tail beneath its body, averting its gaze, or rolling onto its side. A dominant behavior includes suddenly stiffening the body and gazing with a fixed stare at the other individual.

Within their pack, Northwestern wolves use different vocalizations, body postures, and scent marking to display different social statuses. The alpha male wolf uses his superior strength to assert his authority over the other wolves in the pack. Conversely, a subordinate wolf will make himself appear smaller by holding his tail between his legs and lowering his head to show respect for his alpha male counterpart.

Northwestern Wolves are monogamous and mate for life. Typically only the alpha pair of a pack breeds and produces pups. They select den sites in secure locations like thick brush, hollow logs, or rock shelters, often on the high ground.

Prior to breeding, the female will go through a heat period where she does not leave her natal pack. The mating ritual itself starts when the male wolf follows the female closely and positions himself in front of her.

Northwestern wolves breed during February and March. The wolf’s gestation period is 63 days, after which they produce pups in litters of 4-6. The wolf’s have a very nurturing and caring nature, towards their offspring, and are very protective over them.

The pack is a close-knit family unit. As the pups mature, they are accepted into the hunting group and learn to forage and hunt on their own. Young usually reach adult size by 6–8 months of age, and become reproductively mature at 22 months.

Today, they face new threats as a result of agricultural expansion, logging and residential and commercial development, resulting in the clearing of lush forests that are the richest sources of prey for Northwestern wolves.

Northwestern wolves are an endangered species that have found refuge largely due to their reintroduction into the Yellowstone National Park created in 1872. Now, most of the Northwestern wolves reside within this park, as well as a few neighboring areas in northwestern Montana. As in many wilderness areas, humans are considered one of Northwestern wolf’s greatest threats to survival. They are also all present in the Canadian or British safari parks

A rugged explorer and the ultimate wilderness symbol, with its large eyes and ears, wolf-like coat, inquisitive demeanor, and cunning nature, the Northwestern Wolf is one dog you’ll never forget. With a name that means “Spirit of the West,” it’s right at home roaming forests in the Pacific Northwest.

Masters of the north, the Northwestern Wolf has a combination of strength, sleekness, and agility; definitely a force to reckon with.