The reddish or light brown coloring of the Indian Wolf is part of the reason that many believe it to be a fox when they catch a glimpse of it in the wild. They are very small wolves with 3 feet in length. They also have a coat that is shorter and less dense than other species of wolves. Since they live in a warm region though it is very fitting of their needs for survival.

These wolves are found on the open lands of India and they are able to survive in areas that are considered to be desert like in nature. Some of the locations in India where they have been known to roam include Pradesh and Gujarat.

While the Indian Wolf is able to howl just like other species, it rarely does. This is puzzling to experts. However, it is believed that they don’t feel as territorial about their range as other species. Therefore they don’t use the howl to warn others that they have already staked a claim in a given location.

For the Indian Wolf a diet that is composed of small animals is what they survive on. This includes rodents, rabbits, and raccoons. The pack will be very loosely around a given area and each of them will hunt for their own food. This hunting usually takes place at night and ends at dusk. 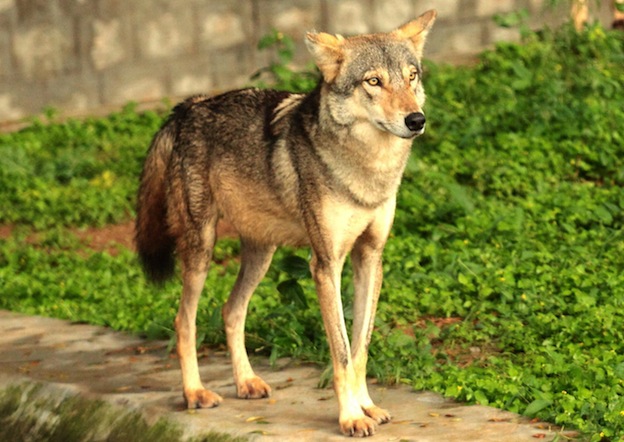 The mating process often takes place in October which is very different from other species of wolves. It is believed the timing of the rains which bring out additional food sources for these wolves is partial responsible for that timing.

The mother will have several dens in a given area and move her young around often. They come out when they are about three months of age. The entire pack will help to care for them. While they mother goes to hunt for food others will care for them. It won’t be long before they are joining her on hunting for their own food.

It is believed that only about 3,000 Indian Wolves remain in the wild today. There is only one known location at this time where they are kept in captivity. This is the Jai Samand Sanctuary in Rajasthan.

Due to the bad reputation that these wolves have and the poor economic area where they live, it is hard to get effective practices in place for conservation. Many feel that the funding should be spent on helping the people of India instead of protecting the wolves. It becomes an issue where ethics and politics continue to present red tape to get through.

There are stories in India about this particular wolf stealing small children. However, experts don’t believe this is true. Instead they believe such stories have been passed along from generation to generation as a way to get children to stay close to the villages. It is also believed some children may have been taken by other animals, but that the Indian Wolf isn’t has all blame.

This particular wolf is known to kill livestock though which means it has become an enemy of people in those regions. They are also known to attack humans and experts believe this is due to their lack of food in their natural environment. Even though it is protected due to being endangered, hunting of them continues.