The Common Wolf is also known as the Gray Wolf. This is the type of wolf that most people are familiar with. However, they are often mistaken for other types of wolves out there. This is because the actual appearance of them can be drastically different based upon the location they are in.

Some of the Common Wolves out there only weigh about 80 pounds. Others can be closer to 100 pounds. Researchers have come across some that were almost 200 pounds but that is very rare. They range in length from 4 ½ feet to 6 feet. The colors of them can include brown, gray, black, red, white, and a mix of various colorings and shades.

The head and the muzzle of these wolves are narrow compared to other species. They also don’t have the same mass across the shoulders. Yet they are still very powerful animals. They aren’t as fast as other animals, but they have a stamina that can’t be matched. So they may not have that initial speed but they can go the distance at a good rate.

The webbing between each toe allows the Common Wolf to be able to move easily regardless of the type of terrain they are on. They have very large feet so they are able to shift how their weight is distributed. This helps them when they are walking on snow so they don’t sink into the soft areas.

They have very sharp teeth and jaws. It is believed they have more than three times the biting power behind them than the average canine. What is very interesting is that the saliva from a Common Wolf has been proven to help new tissues grow and to reduce the risk of an infection occurring.

DNA testing shows that the Common Wolf has evolved from canines. Today there are several subspecies of this wolf as well. The fact that there are significant differences that continue to be found indicates that these wolves moved in various directions long ago. They did so for the ultimate chance of survival.

The Common Wolf uses a variety of vocal and non verbal forms of communication within their pack. They are very dependent upon their social group and do all they can to maintain it. They can be aggressive towards other wolf packs, often using howling to inform them not to come into their established territory.

They will heavily mark their territory with urine and scents that they make in their body. Rolling around on the ground and rubbing against trees helps them to be able to release these scents. It can be very difficult for young Common Wolves to find their own habitat out there in the wild.

The Common Wolf is able to adapt to a variety of surroundings. As long as they can find food and they have a large habitat to move around in they seem to do very well. They are known to live in regions that include mountains, plains, deserts, grasslands, and even some urban locations. They are found throughout Northern America.

Unfortunately, the span of area that these wolves used to know has been drastically reduced. The fact that humans continue to move into their territory means they are fighting for the rights to less and less space out there in the wild. As a result of this some locations that used to be well known for the Common Wolf now have very few or none at all.

There have been some successful efforts though to reintroduce the Common Wolf to some locations they previously had inhabited. These programs are showing that giving them back their natural environment can be a great way to keep the population going.

Most experts believe that the Common Wolf helps to bring order and balance to the ecosystems that they are a part of. They are very opportunistic when it comes to what they feed upon. This ranges from small rodents to medium and very large animals. Depending on the location this can include deer, beavers and bisons.

What is interesting is that they usually won’t attack prey that stands still. Yet they can surround it for hours or days at a time. Should the animal run, that is when the Common Wolves will chase it and try to take it down.

Like other wolf pups, these will be fed regurgitated meat by members of the pack. That allows them to get the nutrition they need after they are done feeding from the body of their mothers. When they are ready to go on the hunt at about six months of age they will be learning how to survive.

The pups are allowed to fight for food when it is time to take part in such eating. Many experts believe this fight to get to consume food is part of how their order in the pack will be determined. 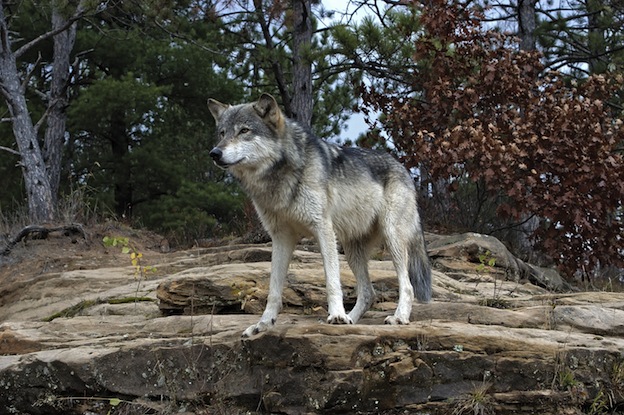 There is a long mating season for the Common Wolf. It can last from January through April. It seems that the higher elevation that they live in the later in the year that they will mate. The male alpha leader of the pack will mate with the beta female. However, he may also mate with other females in the pack. This is different that other species of wolves where he will only mate with the beta.

Once mating is successful it will be just over two months before the litter of pups arrives. They are deaf and blind at birth with each of them weighing one pound at the most. Generally each litter will have from 4 to 6 pups. However, it is possible for her to have many more than that. She will give birth to her young inside of a den.

There she will remain with them on and off for the first three months of life. She will leave only to get food for herself. This is necessary for her to continue making milk for the young to survive on. When they do come out of the den with her they will be cared for by the entire wolf pack.

The young wolves will continue to be a part of it until they are fully mature. About two years of age most of them will leave the pack to go start one of their own. Their drive to mate is often what triggers them to do so. If they remain in their Common Wolf pack of origin they may never have the opportunity to do so.

The Common Wolf does have problems with humans when it comes to predators. There are lots of farmers and ranchers out there that don’t care for them. Other people see them as a menace or as a very dangerous type of animal. Therefore they don’t really care if they end up being killed or not.

The Common Wolf is believed to have the best chance of survival in regards to all the other species of wolves. Many of them are endangered but the numbers of these are high enough that it isn’t a huge concern at this point in time that they may not have a future.